The Liga ACB, known as Liga Endesa for sponsorship reasons, is the top professional basketball division of the Spanish system. ACB League is often underrated in comparison to the NBA. Top teams such as Real Madrid have provided the likes of Luka Doncic to the NBA and have always been a main stay in the Euro Leagues. Real Madrid have won the last 2 championships in 2019 and 2018 with Valencia in 2017. 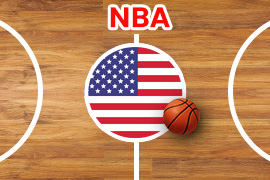 The National Basketball Association is the highest league of Basketball in the world. 30 teams are divided into two conferences - the Eastern and Western. Betting intensity rivals Football as the season gets to the final playoffs when passions run high. The NBA is home to some of the most notable Basketball players in the world such as, Kobe Bryant, Shaquille O’Neill, Wilt Chamberlain and Larry Bird. The Toronto Raptors won the previous 2018/19 season beating the Golden State Warriors in the final.
KARAMBA EGR AWARD WINNER - BEST CUSTOMER RELATIONSHIP MANAGEMENT CAMPAIGN 2019